There you are in class and you write on your whiteboard (or chalkboard, I hear those still exist) the most perfect explanation of whatever it is you explain. Wouldn’t you love to be able to save that to share with future students? Or perhaps you’re part way through the material you want to cover when class ends. Don’t you wish you could save what you’ve written so you could start there next class? Do you find that the linearity of PowerPoint is starting to wear you down? Wouldn’t you love to just point at a spot on the screen and zip to the slide you want? Or wouldn’t it be nice to access the internet without moving from the front of the room? Don’t you wish you had a few thousand dollars laying around for a smartboard?

Before we play MacGyver, I’m going to send you to watch Johnny Lee show you how this works in a 5-minute TED talk video. If you like what you see, come back, and I’ll get you set up with everything you need.

1. Wii remote. That’s easy. You can use the one that came with your Wii – you’re not going to do anything to it other than tote it to class. It will still work just the same way with your Wii system. You don’t have a Wii system? You can buy a Wii remote wherever game systems are sold.

2. Infrared pen. This is a little harder. You can order them online from $8 to $30. IRPensOnline and Penteractive are two such sites [Update: Some sellers have pressure-activated pens if you’d rather not use a thumb switch]. (Disclaimer: I haven’t used either retailer. Sites are provided only for informational purposes.) Or you can make your own (thus the trip to Radio Shack). I used the instructions from Ken Moore of Ken Moore Design. He includes a how-to video, written instructions, and a (printable) Radio Shack shopping list complete with part numbers. I opted to use a dried up EXPO dry-erase marker because we seem to have those in abundance. You know where to find them. In your classroom, it’s usually the first one you pick up. Because some of the parts you need are sold in pairs it makes sense to make two pens. You should always have a back-up anyway.

Tips for making the pen.

a. Ken’s shopping list doesn’t include wire. I used 22-gauge – definitely something on the smaller side is better. Wires have to be stuffed into the marker with the battery holder so the smaller they are, the easier everything fits.

b. When he says that force is needed to get the LED holder into the tip of the marker, he is not joking. I used a drill to bore the tip to make it a little wider, particularly around the opening. I think this made it easier for the threads of the LED holder to bite. Once they did, screwing it in wasn’t hard. Lots of force to get it started. Seriously.

c. For my pen, small, needle-nose pliers will be needed to change the battery. I’ll worry about that when the time comes.

d. One person recommended a daub of super glue to hold the LED in place in the holder – not a bad idea.

e. Since the LED is infrared, by definition, you can’t see it when it’s lit. Please remember this after you followed the instructions to the letter, push the switch, and nothing seems to happen. Dig out your digital camera or flip on your cell phone’s camera, press the pen’s switch, and look at it with your camera. If your pen is working, you’ll see the light through your camera’s viewfinder.

3. Smoothboard software. This is what allows your Wii remote to talk to your computer. It’s not the only software out there, but it has a lot of functionality so it’s the one I recommend. It’s free for educational use, but when you run it, you’ll have to wait 10-15 seconds before the “continue unregistered version” option becomes available. If you like the software, send them $30 to register it.In this blog post, I’m going to just talk about the basic setup, but know that with Smoothboard, you can use a second Wii remote placed in a different spot for redundancy (if you’re standing in front of one, the other one can still ‘see’ the screen; this may also reduce the choppiness that sometimes happens, but I haven’t tried it) or you can use a second one as a ‘presenter’ tool. The latter seems like too much work to me, but you can read the Smoothboard manual and decide for yourself.

4. Classroom Presenter. Okay, this isn’t necessary, but it makes a great smartboard! This free (PC) software (courtesy of the Center for Collaborative Technologies at the University of Washington) was designed for use with TabletPCs. But, when projected on the classroom screen, it gives you terrific smartboard functionality. Of course anything that’s on your computer screen will show up on your classroom screen, but imagine having this: 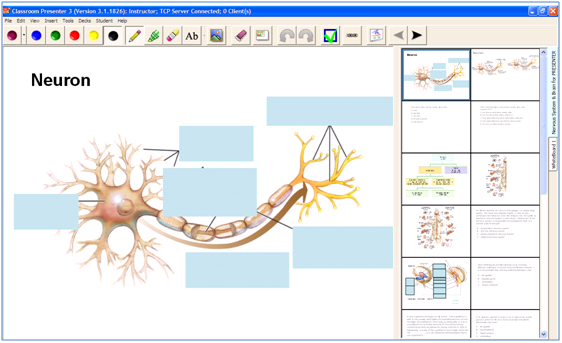 Load your PowerPoint into Classroom Presenter. Take your infrared pen and, in the toolbar, ‘tap’ the pencil, and write on the slide. Change colors. Switch to the highlighter. Erase individual marks or the entire screen. Quickly ‘tap’ any of the slides on the right to show a new slide. Open a blank screen. When you’re done, save your file, and open it again next class. Or you can save it as html and upload it to your website, course management system, or email to your students. If your computer is WiFi-enabled or is connected to a WiFi network, students with (PC) laptops who are running Classroom Presenter can see your slides on their computer, get your annotations in real time, make their own annotations, and save the file at the end of class. And they can send slides to you in real time, and you can display them for the class. But I digress. For more on this program, again, see my 4/14/2009 blog post.

1. Connect your Wii remote to your computer via Bluetooth. Open your computer’s Bluetooth manager, and tell it you’d like to connect a new device. Put your Wii remote in ‘discoverable’ mode. To do this, press and hold the 1 and 2 buttons at the same time. As long as the lights are blinking, it’s ready to be discovered. It will appear in your list as Nintendo RVL-CNT-01. Any time you want to connect your Wii remote, press and hold those 1 and 2 buttons again and then double-click your new Nintendo option in your Bluetooth manager. Presto. It’s connected.

2. Turn on your classroom projector. Once your computer’s screen is displayed, you’re ready to go.

3. Place your Wii remote. This will require a little trial and error to find the best location.

a. To the right or left? Consider how you usually write on the board. You don’t want your back between the pen and the Wii remote. (Better yet, use two remotes, one on each side. Or you can have one remote in closer; that should give greater precision to your writing in the area covered by that closer remote.) 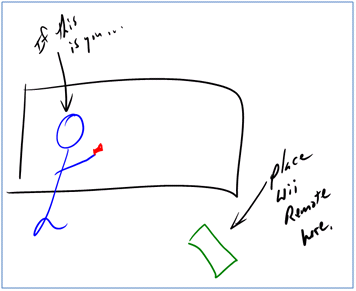 b. How far away? One suggestion, based on a little research, is to take the height of your screen and double it. That’s the distance away from the screen you should place your Wii remote. For example, if your screen is 4 feet high, then your Wii remote should be placed 8 feet away. In my classroom, that worked great. (When I was farther away, the infrared light was too hard for the Wii remote to pick up, and my nice curved line started jumping around all over the place.)

c. How high? The first few times I did this, I found that I tended to point the remote too low. Aim for the middle of the screen. On a desk, I flipped a table-top podium on its side, set 2 textbooks on top of that and then propped a whiteboard eraser under the front of the remote to angle it up a bit. That worked perfectly. Of course a tripod works, too. (Penteractive sells a replacement battery cover for the Wii remote that has a tripod mount built into it.)

4. Run the Smoothboard software. The first thing you need to do is calibrate it. Just press the A button on the Wii remote. Here is the calibration screen:

5. Run Classroom Presenter, or whatever other software you’d like. Your infrared pen, when the switch is pressed, now acts like a mouse controlling your cursor. Open programs. Open websites. Write on the screen. Anything you can do with a mouse, you can now do with your infrared pen.

Writing takes some getting used to. To print words, press the button on the pen, draw your line, stop pressing the button. Repeat for each line. If you write in cursive, you’ll likely have an easier time since each word is one big line. Precision isn’t this tool’s strong point. Think of it as writing with a crayon.

If you have the money, by all means go with a smartboard or a TabletPC. If you’re looking for some impressive functionality for a cost that is almost covered by the change in your couch, it’s worth trying out.

If you decide to give this a whirl, let me know how it goes!

28 thoughts on “The Smartboard Alternative for $40”